Do you want to work in automation to make a difference in the world? There are several options if you’re seeking fascinating and satisfying work that will help organizations adapt to using RPA. There are many paths into the RPA business depending on experience and qualifications, whether you’re a student taking your first steps into the world of work or an established professional wishing to shift careers and earn a high RPA developer salary in  India. 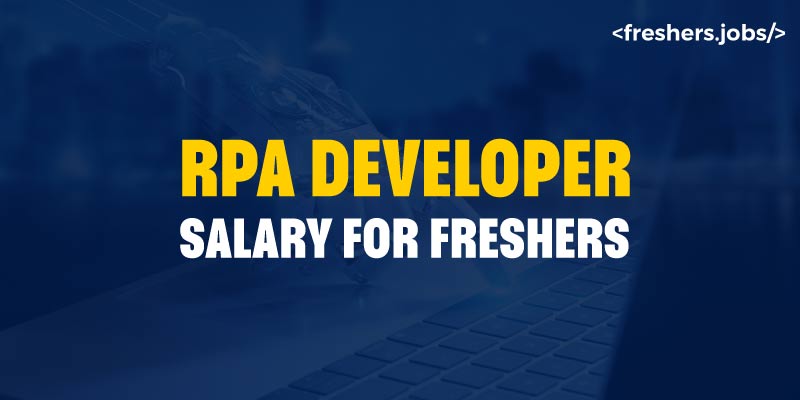 So, what options do you have, and how do you go about pursuing them? It all depends on your level of RPA experience. Let’s start by delving deeper into the definition of RPA and the salary for the RPA Developer.

Explaining what is RPA and who is an RPA Developer?

The Robotic Automation Process (RPA) refers to a set of technologies, which often include artificial intelligence, that allows computers to accomplish tasks that would normally be completed by humans.

Who is an RPA Developer?

An RPA developer is a multi-skilled individual who collaborates with business professionals to create and implement automated procedures. This occupation is known by many different names, such as Process Designer or Automation Architect. The RPA jobs salary in India is extremely incomparable to other jobs.

Digital transformation greatly impacts our lives, and the demand for certified RPA developers is high compared to other developers as it mainly deals with Artificial Intelligence. Today most companies pay a high salary to fresher RPA Developers. However, the salary ranges mostly depend on the RPA Job role you working for and the place.

Let us now discuss some of the factors that are influencing the salary of rpa developer in India.

The primary factors influencing the rpa developer salary in India is

As there is a lot of Demand for RPA Developers all around the world. The competition is getting fierce every moment and thus there is a salary variation too. Most IT Companies located in major cities pay differently for RPA developers as per the demand. Here below is the proof

Freshers joining as RPA Developers can expect a good amount of cash as this profile is highly trending and is considered to be high future growth.  Fresher RPA Developers, here is the salary estimate for you.

The RPA Developer salary as per the Job role

There are various Job roles working on RPA. Here are a few roles and their salaries

The RPA Developer’s salary according to the Company

Almost all the companies pay excellent pay scale for the freshers in the field of RPA. Scroll down to see the list of the salaries of RPA Developer.

Hope you have got an idea about the rpa developer salary in India and the variations.

Here are the Skills needed for an RPA Developer

We currently have a good idea of what an RPA engineer is supposed to do on a regular basis. Let’s take a look at the skills required to work as an RPA engineer.

Responsibility of an RPA Developer

In the near future, RPA is projected to achieve its full potential and also pay RPA developers a good rpa developer salary India.

Hope you have got an idea of the blog on rpa developer salary in India. The salary numbers are approximate. The abilities, grasping and developing on RPA can cause the organization to develop and thus offering you a wonderful salary

Individuals with experience in RPA are becoming increasingly interested in India. You should consider upgrading your skills to make the most of this chance. Freshers, you can enroll in the RPA Courses that help you understand the different, newer concepts of RPA and apply for jobs at freshers.jobs, and henceforth you can become a proficient RPA Developer.